We recently discussed “Sensitivity to image recurrence across eye-movement-like image transitions through local serial inhibition in the retina” by Vidhyasankar Krishnamoorthy, Michael Weick, and Tim Gollisch [1]. It’s a nice paper about a novel response property in the mouse retina that the authors call image recurrence sensitivity (IRS).

Vision under natural conditions involves constant eye movements, such as large saccades, smooth pursuits for tracking moving objects, and smaller fixational movements. The last kind is the reason why we are able to see while focusing our gaze on an object – without it the image will soon fade due to neural adaptation (as can be demonstrated in the lab with retinal stabilization). Even though these eye movements likely pose a significant problem to the early visual system, little is known about how the retinal circuits deal with them. Krishnamoorthy and colleagues investigate this question in their paper by recording from the retinal ganglion cells (RGCs) of the isolated mouse retina using multi-electrode arrays. They present stimuli designed to mimic rapid eye movements: square wave gratings whose phase changes (by translation) to one of four possible locations. The transition period lasts about 100 ms, after which the grating remains stationary for another 800 ms before the next transition begins. The authors summarize the neural response to these stimuli with a matrix like the one below, whose (i,j)th element is the PSTH following a transition period (shaded) from position i to position j: 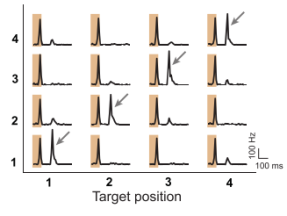 Curiously, they noticed that 5-10% of the RGCs in their recordings fired a burst of action potentials shortly after the transition period – but only if the starting and target positions were the same (noted by arrows in the figure above). In other words, these neurons were highly sensitive to the recurrence of the image that they just saw.

The authors call them IRS cells and suggest that they form a particular cell type: most of them have large cell bodies, non-overlapping receptive fields, similar temporal filter waveform, and transient OFF responses. Based on these observations, the authors think that they are the OFF transient α-RGCs [2].

This intriguing response property was then further studied along a number of dimensions. IRS was remarkably invariant to several kinds of changes. For example, it didn’t matter if the transition period was replaced with a gray illumination, or if the contrast between the starting and target positions were different. Spatially limiting the stimulus to cover only the receptive field center and replacing white bars with gray ones also had little effect. Finally, changing the stimulus from gratings to naturalistic images preserved the IRS (though the effect is weaker), indicating that this may generalize to real stimuli that a mouse would see.

The IRS cells were, however, sensitive to small spatial displacements. For example, if the target position was 45 µm removed from the starting position (measured on the retinal surface; about the size of retinal bipolar cell receptive field), the IRS would decline by about 50 %. Sensitivity to such small changes hints that the role of IRS may be to counteract small ocular drifts.

The authors then tried to understand the circuit-level mechanism of IRS by infusing pharmacological agents during recording. Blocking inhibition with strychnine (glycine antagonist) and gabazine (GABA antagonist) led to loss of IRS, but interestingly, by two distinct mechanisms: strychnine decreased the specificity (post-transition activity now occurs even if the starting and target position are different), whereas gabazine decreased the amplitude. This led to the idea that two types of amacrine cells are involved in this circuit, which is reflected in the model proposed by the authors: the IRS cell receives excitatory input from an OFF bipolar cell directly and inhibitory input from an ON bipolar cell sign-inverted via an ON amacrine cell; in addition, the OFF bipolar cell contacts an OFF amacrine cell, which inhibits the ON amacrine cell. This serial feedforward inhibition (similar to the switching circuit in [3]) is key to truncating the inhibition from the ON amacrine cell (from the transition period) and preserving the excitatory input from the OFF bipolar cell in the recurrence of dark patches. The authors were able to identify a set of parameters that qualitatively generates IRS response, as well as the other experimental observations.

Overall, I thought this was a very nice paper. It clearly presents an interesting response property uncovered by a careful stimulus design. The model is grounded on pharmacological experiments and intracellular recordings, and ties together many of the results. Though the experiments are done in the isolated retina, the authors make serious attempts to make their results relevant to the behaving animal by using realistic stimulus conditions (rapid image transitions) and naturalistic images (this should make those of us who still show static sinusoidal gratings to intact animals blush). Finally, I was surprised by the rich selectivity and invariance of the IRS cells – concepts usually reserved for neurons in the higher order cortical areas.

However, we also identified a number of lingering questions. The first has to do with the classification of IRS cells as α-RGCs. The authors’ observations lend some support to this, but it may not be enough. Since we now have genetic markers that unambiguously identify α-RGCs, it would have been good to see some molecular evidence, e.g. by filling the IRS cells after intracellular recording and staining them for α-RGC markers such as osteopontin [4].

Another question has to do with the putative function of these cells. As the authors acknowledge, it is unclear if the mouse makes small fixational eye movements to counteract gaze shifts. Given that the mouse retina lacks a fovea, eye movements in general may be less important for mice than e.g., head movements, and they may have developed a different strategy to combat adaptation-induced blindness. IRS is also agnostic of low-level visual features: it simply remembers a scene (with some negative contrast) and indicates its recurrence. Could a downstream neuron decode this for visual processing? And how long does this visual memory last? Figure 8 supplement 1 shows that the model loses IRS when transition periods becomes longer than 100 ms, but it would be good to see experimental evidence for this. This may be important for understanding the relevance of this response property to behavior, which happens on the order of seconds.

All in all, this study reminds us that a brain area that has been extensively studied (such as the retina) can still yield novel insights and open up new avenues of research when one cleverly matches the experimental condition to the natural ethology of the animal.